Well, we are on the road heading back. Looking forward to being home but going to miss the relationships.
Even with the cold weather we still completed all the projects. More projects completed include:
Candy Red Cloud – bathroom – completed
Warrior Center Ceiling – completed 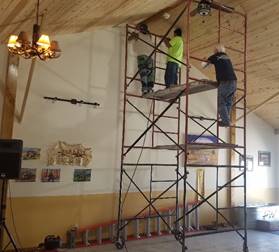 Verdel Home – new project – several repairs to make it livable – completed – Verdel is in the rehabilitation program but his girlfriend and daughter were being persecuted by her family and she was being kicked out of her grandmother’s home. Verdel was looking at leaving the program so we helped him get his girlfriend into his tribal home. 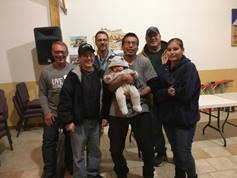 Warrior Center Electrical – Completed – Here the team is supervising Bob putting in a generator bypass circuit. Bob had to spend a lot of time in the cold weather. 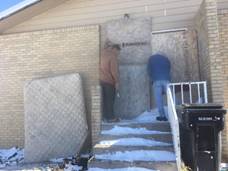 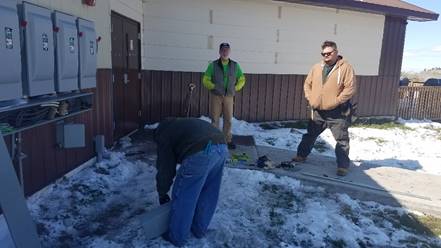 Welding Garage – new door – completed
Travis made us prison tacos for lunch yesterday. Travis said that they would make this in prison as the cafeteria food was so bad. Basically, it is made from chips(mix of different kinds that are available), roman noodles, cheese, and meat. We had ground beef but in prison, they use summer sausage. The mixture is put into the chip bags, crunched up, and then you add hot water. This is then put on a burrito. They can’t cook in prison. 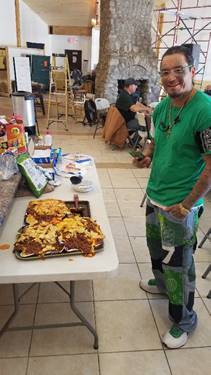 Travis is in some videos that are very good to see. They tell his testimony and give you a very good look at what life on the reservation is really like. HIGHLY recommend seeing these videos:
Dakota: The Story of the Lakota
Broken Hearts Healed by Travis Lone Hill
There is another video on Amazon Prime that provides a very good history of the Pine Ridge Reservation called the 7th Generation

On the last day we have awards:
o Clyde – Tortoise – he was a steady worker and completed his projects with detailed perfection
o Erich – Boot – he jumped in where needed and found solutions
o Bob – Buffalo – many times he was working by himself and attacked problems that were difficult to solve.
o Scott – Butterfly – he was always fluttering around giving advice to everyone, but we don’t have any pictures of him doing actual work. 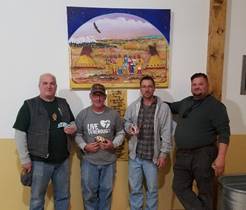 We are bringing back a bunch of wood crosses that the Lakota men made in the workshop. We will have them on display at the October 27 services.
It was a great trip. We engaged with many Lakota men and families and we are praying we left them with the love of Jesus and a new hope to be a light in their community.

Last night it snowed three inches. It is cold, 20 degrees and windy so there are snow drifts. Carhart donated socks, gloves, coats and tool bags. We also just heard that most of the people coming for the community dinner have canceled due to the weather and schools being closed. It is very hard to clear the roads on the reservation due to the blowing snow. The Lakota men are wearing the Carhartt donated winter coats in the front row. 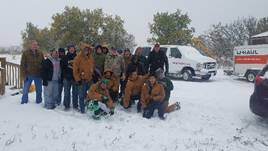 Last night we had Lakota Tacos made by Henry Brown (a local Lakota):

After dinner Joe Cross a local Lakota pastor shared his testimony. He was in the military for 21 years and returned to the reservation. He dedicated his next four years to the Lakota Seven Sacred Rites:
Canupa: The Sacred Pipe Ceremony
Inipi: The Sweat Lodge
Hanblecha: The Vision Quest
Wiwangwacipi: The Sun Dance
Hunkapi: The Making of Relatives
The Keeping of The Soul
Ishna Ta Awi Cha Lowan: Preparing a Girl for Womanhood
Each year he participated in the yearly Sun Dance which involves four days of fasting followed by hanging your body by the chest using hooks and then at the command of the lead medicine man forcing the hooks to be ripped from your body. During this ordeal Joe prayed to God to show him direction and give him purpose. At the end of the ceremony the medicine man declared that this was to worship the Sun God. Joe had been studying the bible while in the military and realized that his Lakota teachings were not true to the bible, even though many of the Lakota medicine men said that they were worshiping the same God. Joe took this as a message from God that he must teach other Lakota that their God was false, and he should raise up other Lakota to be pastors. Over the last several years he has become a pastor and is actively working to raise up other pastors. He believes that the only way the Lakota nation will truly follow Jesus is if they are taught about Jesus from other Lakota.

Projects we have been working on over the last couple of days:
Wes Yellow Horse Foundation – Completed – first picture shows us installing blocks under the house after we raised it up. The other picture is the house, which here is considered in “good” condition as it’s frame is structurally sound. The reason it needed a new foundation is that the old floor and had rooted out and thus was removed along with the lower part of the house.

Candy Red Cloud – Installed toilet, shower base, adjusted plumbing and installed most of the paneling. (Had to piece three pictures together as the room is small). We expect to complete this today.

Peggy White Dress – Driveway – Completed (Before and after)

There are many other projects:
Completed fixing electrical issues at the warrior center
Completed getting heat at Heidi’s trailer on the reservation after finding 40-year-old parts in the pole barn here on campus
Completed new garage door on welding shed
Started working on repairing trailer fenders (seems to be a project every other year)
Other stuff…..
Earlier this year Hands of Faith ask if we could help them to provide woodworking tools, which we did, so they could mass produce crosses to be given in exchange for donations. Almost every weekend they have been visiting stores (Sam’s Club, Walmart and Farm Supply stores within three hour drive). These funds will be used to pay for the Lakota men in the program, which costs about $4,000 for each man for three months. The program includes Christian based rehabilitation and vocational skills training.

Posted by John Hall with

To receive updates to the Missions Blog, add an RSS feed reader extension to your browser, phone, or tablet and then subscribe by clicking the link above.

We believe God wants to position Faith to be a generous body of believers able to invest in missional ministry where we live, work, play and beyond; wherever God leads us to bless those who need the Gospel.

We believe there are mission fields everywhere - from our own neighborhoods to places much farther away. For those who like to venture farther away to serve the Lord, we offer a few mission trips every year.